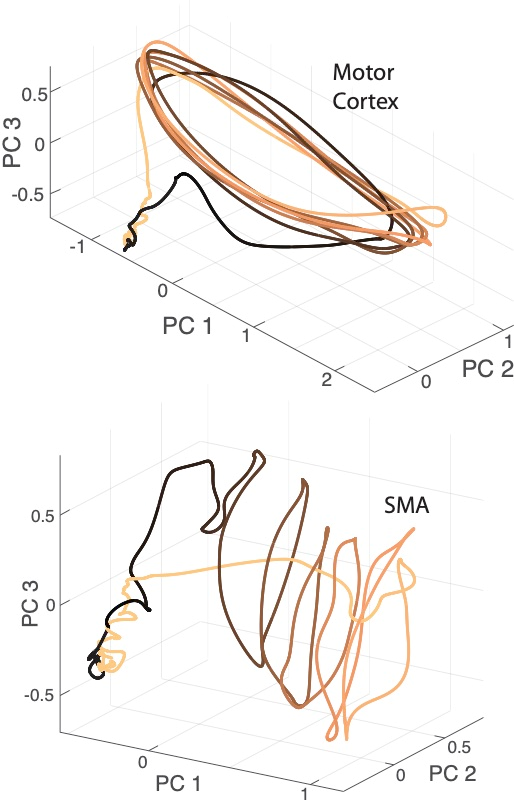 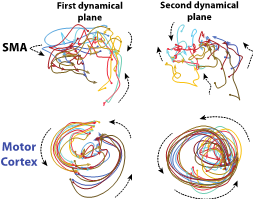 Since the late 1960’s, a large literature has attempted to characterize the properties of neural responses in motor areas of the brain, and to relate those responses to externally measured variables such as muscle activity or reach direction. In some ways this field has been very successful: early studies revealed robust movement-related modulation of neural firing rates, across a broad network of reciprocally connected areas. Such activity is broadly tuned, in the sense that most neurons respond during most movements, and it was thus appreciated that the relevant computations must be understood at the population level, rather than via the properties of a small subset of responsive neurons. Yet the nature of that population-level computation has remained controversial. This is true even of primary motor cortex, which has made it harder still to characterize and contrast the different computations made by different cortical areas. In general, there remains vigorous disagreement regarding the relationship of cortical activity to the ultimate of the motor system: complex, intricate, temporally rich patterns of activity across a large population of muscles. A fundamental conundrum has been that neural responses in motor cortex (and elsewhere) resemble the responses of muscles in some ways but not others. We will attempt to resolve this apparent paradox through two means. First, we will use emerging methods in rodent that allow recordings from subpopulations of motor cortex neurons, identified via the populations of spinal interneurons to which they project. This will allow us to ask whether the logic of motor cortex responses becomes clearer when subpopulations, with potentially very different roles, are segregated rather than lumped together. Second, we will use analysis methods motivated by network-theory to characterize computationally relevant aspects of the population response. Such methods, many of which exploit machine-learning techniques, hold the promise of explaining otherwise confusing aspects of the population response. Such methods can seek structure predicted by models, determine if it is present, and if so whether it is differentially present across different populations (i.e., subpopulations within motor cortex and populations in other cortical areas). We will also use network modeling both to produce hypotheses, and to explore the computational relevance of novel structure uncovered by our methods. Preliminary data indicate that different populations can appear very similar when analyzed via traditional means, yet show very different population-level structure when approached via our novel methods. Our belief is that a combination of network modeling, analyses inspired by computational-level theories, and a variety of novel classes of data, will allow progress in defining what motor cortex shares with the downstream muscles, what additional computationally relevant properties motor cortex has that the muscles do not, how various computationally relevant properties are / aren’t shared among motor cortex subpopulations, and how the population response in different cortical areas varies in computationally relevant dimensions.